PLANO, Texas—Just outside the town where Doc Holliday got in a major gunfight, Elijah Seybold and Nathan Waller stood back-to-back in silence.

A small crowd gathered nearby as an MC yelled, “One! Two! Three!…Pull!”

Then, Mr. Seybold and Mr. Waller pulled out copper-colored, electronic cigarettes, raised them to their lips, inhaled deeply and shot dense, white plumes of fog out of their mouths.

Two judges perched on stools nearby watched as the contestants’ foggy clouds travelled along with a black measuring stick. As fans held their breath, Mr. Seybold’s cloud reached out all the way to 6 feet. Mr. Waller’s billowed out to about 5. As the judges pointed to Mr. Seybold, the crowd erupted in applause and cheers. “Sweet!” a spectator shouted. Mr. Seybold had won the first round in the Clouds for Heroes competition at the Metro Vapors vape shop.

Welcome to the newest entrant in the extreme sports category: “cloud chasing.” Competitors play it not with balls and bats, but with electronic cigarettes. They are called cloud chasers, and their devoted fans are cloud gazers.

Competitions like this have been heating up worldwide, spreading from Raleigh, N.C., to Los Angeles and Canada to Indonesia. This showdown is one of the smaller contests, but on the same day, there are three others taking place around Dallas at various vape shops, which specialize in sales of refillable e-cigarettes called vaporizers.

Competitions are straightforward. Cloud chasers inhale on the devices, which convert e-cigarette “juice” into vapor. They then toast the competition by blowing the biggest, densest vapor cloud possible. In less than two years, the sport has adopted all the trappings of professional athletics. It not only has fans but teams, sponsors and cash prizes.

“The industry is blowing up,” said Garry Rivera, the 32-year-old chief executive of Surefire Vapor and organizer of the inaugural World Series of Vape, which he is planning in Las Vegas in December. “We might as well take it to the next level.”

Contestants began arriving at Metro Vapors, a vape shop in a strip mall flanked by empty storefronts and a Play It Again Sports store, two hours before the competition. They carry small black cases filled with vaporizers, batteries and tools. Some cloud chasers sport multiple tattoos and ear tunnels. They warm up with Metalcore music blaring over loudspeakers.

About half of the 15 contestants spread out on couches, where they begin tuning up their devices like drag racers tuning hot rods before a race. They twist-resistant wire into coils to carry electricity from their vaporizer’s battery, and weave dry cotton through the coils. The cotton acts as a wick, soaking up e-cigarette juice so the coils can heat it as electricity loops through them.

“I wouldn’t say it’s as hard as tuning a car, but it takes patience and practice,” said Zach Guerra, a 19-year-old competitor from Wylie, Texas.

Technique is important. Winning clouds are more cumulonimbus than cirrus. But not at first. Initially, vapor emerges in narrow, white streams from a vaper’s mouth. Then it billows into an opaque haze that funnels forward for several seconds before fading into white wisps.

“There is a skill to being able to keep a ball of vapor together without it dissipating,” said 29-year-old Matt Maynard, one of the contest’s judges.

Cloud gazing at a vape competition in Plano, Texas. 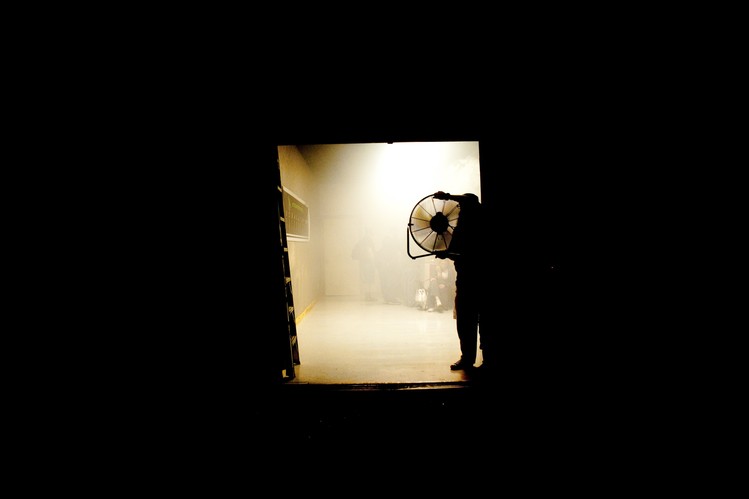 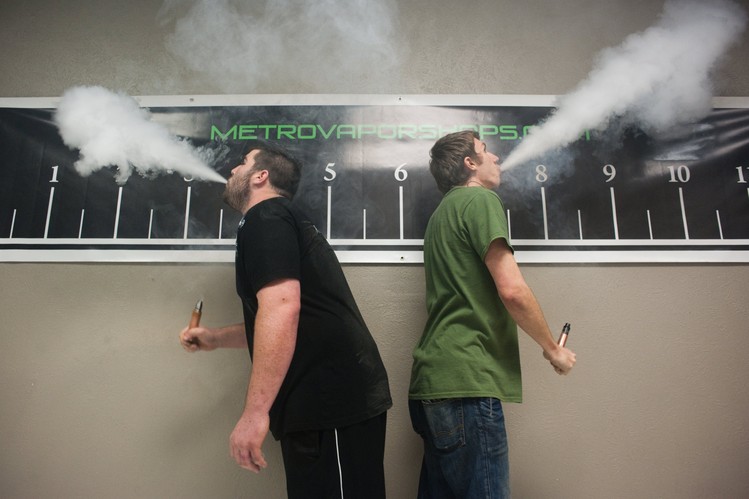 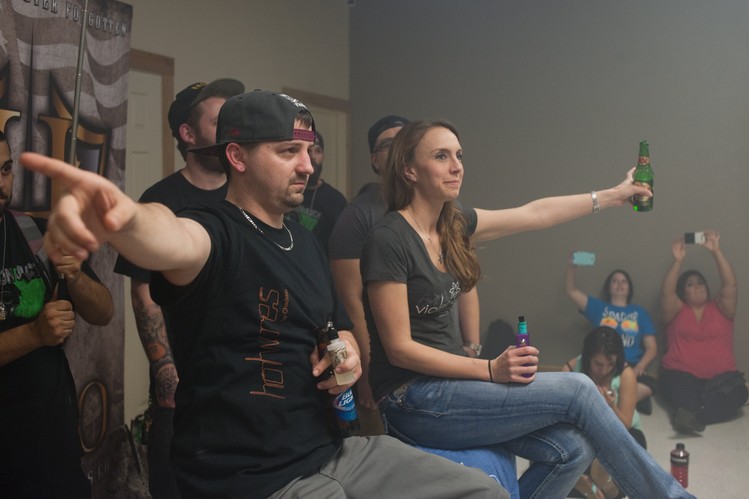 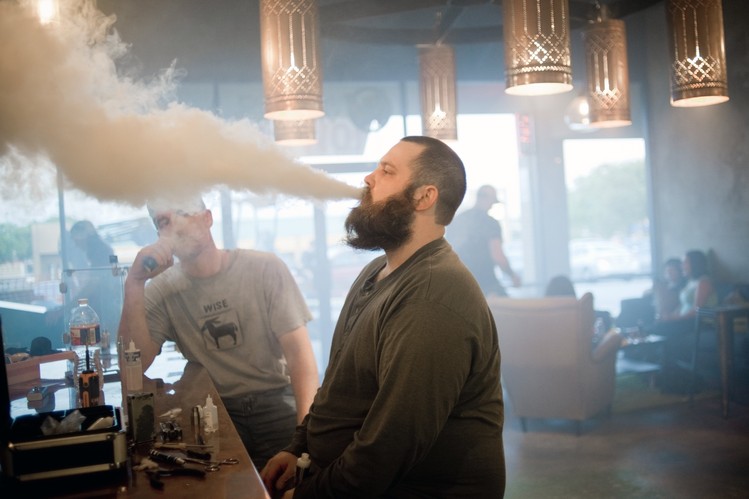 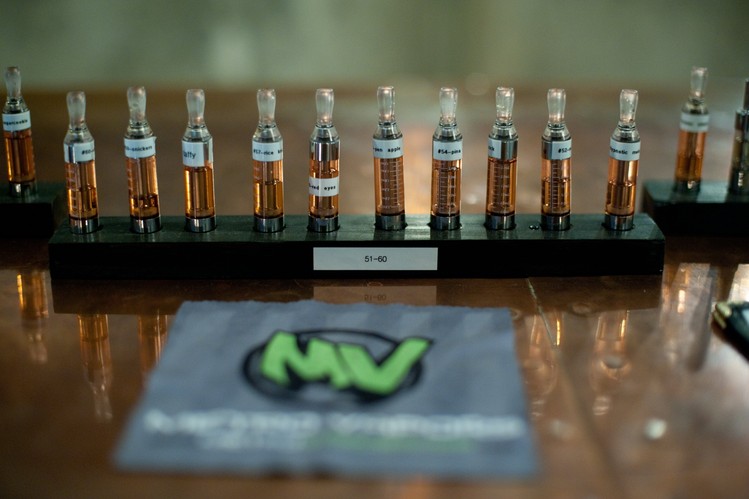 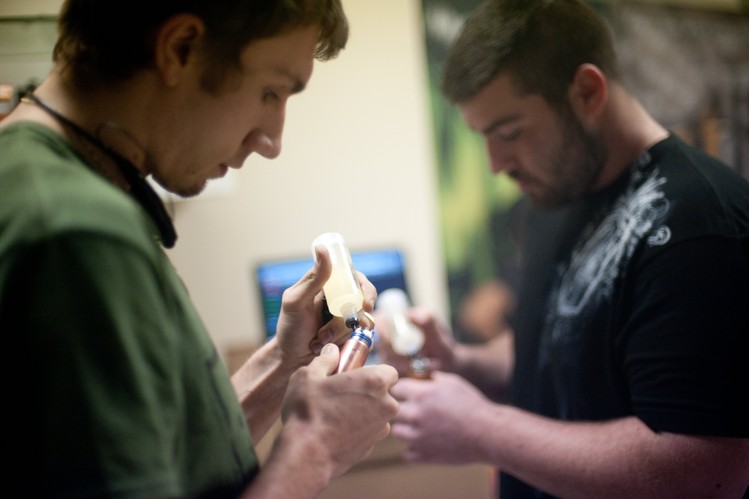 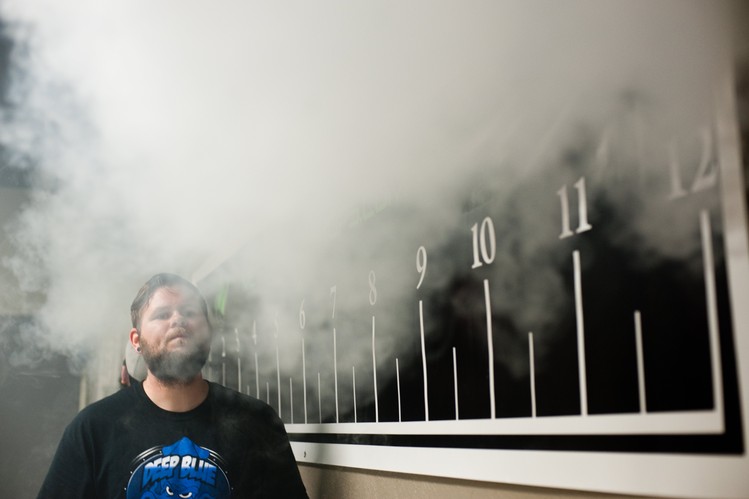 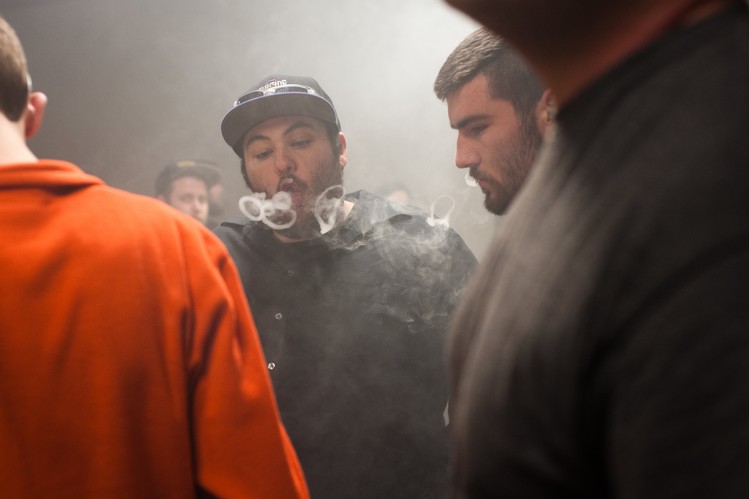 The origins of this sport are somewhat foggy. E-cigarettes first arrived in the U.S. about eight years ago, but it wasn’t until two years ago, when vape shops took off, that shopkeepers started hosting contests to attract customers. Now, there are an estimated 8,500 vape shops in the U.S., doing $1.2 billion in sales, and the number of contests has exploded.

The vast majority of vape shops, where most contests are held, don’t sell to minors because more than 40 states prohibit sales of e-cigarettes to those under 18.

Contestants haven’t turned the sport into a profession—yet. But plenty are making money. Competitions pay winners anywhere from $250 to $2,000, and competitors are signing sponsors to offset travel and equipment costs.

Nick Green, 26, wore a T-shirt featuring his top sponsor, Fogwind Vapor, at Clouds for Heroes. In addition to providing Mr. Green with free samples of its e-cigarette juices, Fogwind is paying for his hotel on May 2 in Las Vegas so he can compete at the Vape Summit convention.

Other teams popping up across the country include: Legion of Ploom in Las Vegas; Sub Ohm Soldiers in North Carolina; and Team Full Steam of Hurricane, W.V.

Brandon Parrish, who owns Metro Vapors, is working to create the Competitive Vaping League, to rank competitors, track results and promote events. “I don’t know that this can be a major league sport, but it can be a big deal—a televised event like professional poker,” Mr. Parrish said.

Not everyone’s a fan. Some vapers fear competitions stigmatize e-cigarettes by making them look more like gaming devices than smoking-cessation tools. They worry contests could escalate pressure on an industry already facing questions from regulators about e-cigarettes because they come in kid-friendly flavors and are sold online.

Moreover, clouds “can be offensive,” said Cheryl Richter, financial secretary of the National Vapers Club, a consumer group. “It gives vaping a bad name, and we don’t need negative publicity.”

Chasers blow off critics. Mr. Maynard said he was a nearly two-pack-a-day smoker until he began competing. Then his hands became so busy modifying his device that they stopped reaching for Marlboro Lights. He called the group at Metro Vapors a “brotherhood” of cigarette quitters.

In the back of Metro Vapors, the contest paused to fan out the fog-filled room before the final round. Then Mr. Guerra and Mr. Green stepped into the ring.

Mr. Green bent his knees, lowered his head and collapsed his diaphragm to make room for maximum inhale. The 6-foot-4-inch bodybuilder then rose upward and rocketed a cloud from his mouth nearly twice as dense and long as Mr. Guerra’s.

Mr. Green collected $500, flashed a hang ten sign and said, “The money’s always nice, but I like the wins more.”