What you need to know about Vaporizers May 27 2014 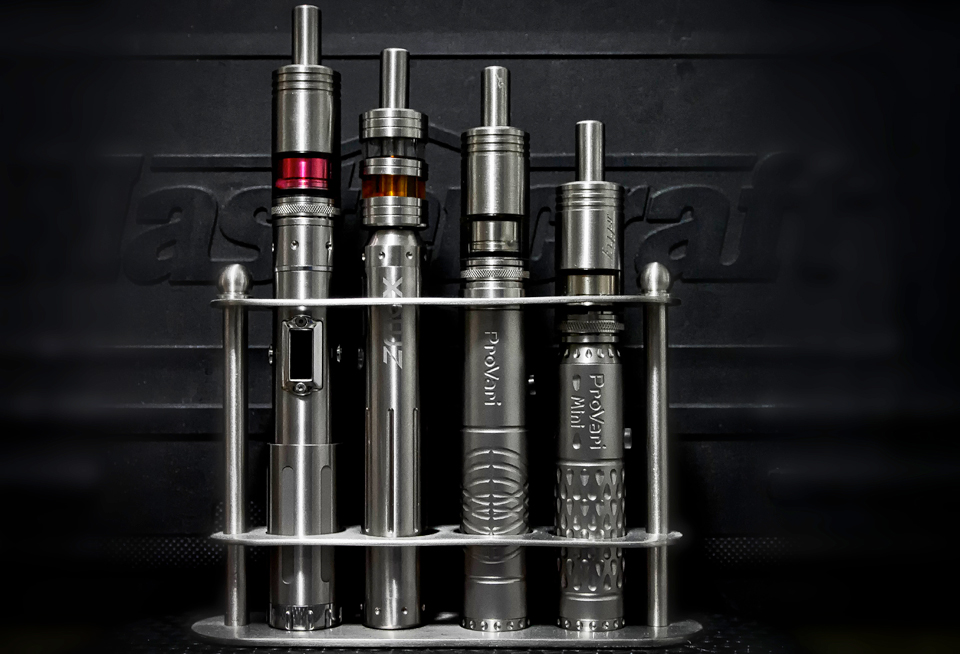 Smoking is bad for you. There! We said it right upfront. There's no reasonable line of argument that can lead to any other conclusion: smoking kills lots of people, around 50 percent of its long-term users. But with all that said, people love to smoke. Heck, I smoked for many, many years and I still would if it had a few more vitamins. But bottom line, tobacco products smell awful, give you bad breath, have become socially unacceptable, cause all kinds of cancer and, ultimately, kill people. What if we were to tell you we've found a new way to get all the nicotine into our bodies with technology, and none of the harmful smoke? Well, good news, we can! Let's talk about vaporizers.

Vaporizers have been around in various forms since the 1960s, though, in that era the sets were more of the tabletop variety and not very pocketable. Chinese pharmacist Han Lik is largely credited as the modern vaporizer's inventor (also called "e-cigarettes"), apparently finding the inspiration after his father died from cancer. The device, then known as Ruyan (means "like smoke") was a hit in his homeland, so naturally it made its way to the US in the mid-2000s. "Vaping" -- the common term for using a vaporizer -- is simply applying heat to a liquid that creates vapor. Breathing in the nearly odorless vapor gives the smoker their nicotine hit. While the most common e-cigarettes look like traditional smokes and are often sold in ciggy-like packaging, the market is overflowing with variety.

Vaping's become so popular in the last couple of years that cafes catering to enthusiasts are beginning to pop up. "Vaporiums," as they're called, sell all the hardware you could ever need, and also offer up vape-able liquids in a dazzling array of flavors. What exactly is in the liquid? Typically, a combination of propylene glycol, artificial flavors and nicotine and are the heart of the vaping experience. Like a cocktail bar, Henley's Vaporium in New York not only sells e-cigs, mods and all the paraphernalia, but is also stocked with every vape liquid flavor under the sun. Your traditionalist tastes are covered by the likes of plain tobacco and menthol, but then it wanders into wildness with saveurs such as crème brûlée, orange creamsicle or even Sinnabun.

Of course vaping isn't reserved solely for the tobacco-loving crowd. Marijuana smokers have latched onto this technology, too. Unlike tobacco vaping, devices like the Pax by Ploom or the Vape Pen (seen below) either cook the herbs in a chamber at a temperature that won't combust the plant matter (but will release the THC) or use an oil derivative of marijuana. Smokers are then treated to all the benefits, medicinal or otherwise, without burning paper and filling their lungs with tar and other crap. We'd go as far to suggest that these high-tech -- and beautifully designed -- vapes bring pot out of its shadier stereotypical back-alleys and into the mainstream. 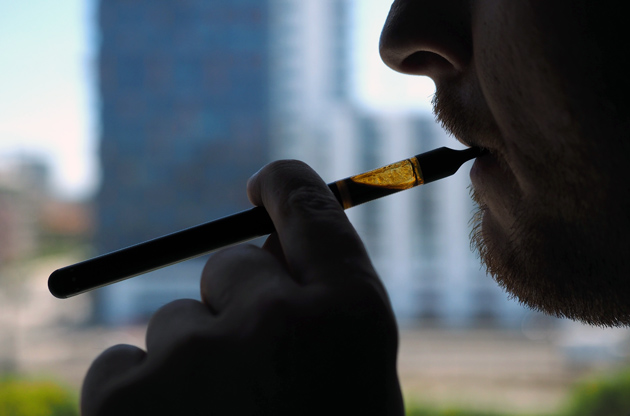 WHY SHOULD I CARE?

Well, if you're a smoker and tired of the aggro you get from the world around you -- plus mom and dad's special kind of grief -- this gives you another avenue to get your nicotine fix. Also, the likelihood of your city/state/country already having banned tobacco use in public places is getting higher by the day, so simply finding a place to have a smoke is becoming a hassle. Next, consider the financials of smoking: yours truly was spending about $9.50 per day on smoking. Over the course of a year that shakes out to about $3,500. E-cigs are much less expensive: using various online calculators we see prices at about a third the cost per year. Prices will vary based on your habits, naturally.

If you're a non-smoker who despises smokers, there's an added win for you, too. Consider that vaping isn't like traditional smoking: there's no smoke, and it really doesn't smell bad at all. You can walk past or through a vape cloud and not smell a thing. Gone are your days as a smoker hater of having to roll your eyes and cough as you walk past smokers. Win, win, right?

HOW DOES IT WORK?

The technology is really simple and consists of: a power source, some coils that heat and vaporize the juice, and an LED light at the tip to make you feel at home. Mods are a whole other thing, though, featuring massive batteries and at times handmade coils for optimum performance. In fact, there's a subculture within the vaping community called "cloud chasers." These folks strive to make the biggest craziest clouds of "smoke" (vapor) possible, though this isn't without risk. Using sub-OHM resistance setups in their atomizers can push their batteries hard enough to cause them to fail. Of course, the folks involved typically know the risks and the science behind a safe setup.

The same level of customization applies to marijuana vaporizers. Not only are vapes for weed portable and really simple to use, but they've also become downright fashionable looking. Take Ploom's Pax vaporizer as an example: it's made of brushed metal, has a retracting mouthpiece, a lovely glowing logo on the body and three temperature settings. Unlike the e-cigs and mods, the Pax has a small oven that is packed full and then the system heats up the pot and vaporizes the cannabinoids (THC and other active ingredients -- the stuff that makes you feel high). Once its logo turns green, you're set to puff away and, when done, pop the magnetic cover on the bottom off, empty it, then drop the Pax into its changing base for the next round.

We don't 100 percent know if it's safe. Studies to determine the potential health and safety issues long-term need time; vaping is so new that this time hasn't elapsed yet. But the fact that you're not burning tobacco and breathing in the smoke "feels" like it should be healthier, right? In fact, Mitch Zeller, director of the United States Food and Drug Administration's Center for Tobacco Products said in mid-May 2014, "If we could get all of those people [who smoke] to completely switch all of their cigarettes to noncombustible cigarettes, it would be good for public health." That's something right? That aside, the only other recent blessing comes from a very recent study on its ability to be used as a tool to quit smoking. It appears that the University College London's 6,000 person, seven-year research shows it is much more successful than other nicotine replacement tools or cold turkey.

Vaping as an official route to quitting smoking is a very new topic. It's definitely being touted as such, but if you ponder that the likes of R.J Reynolds, Philip Morris and Lorillard -- the "big" in big tobacco -- are now heavily invested, you could argue that the profit machine would much rather see subscribers, not quitters. Could it be structured to be used to help folks kick the habit? Yes, of course. Much like nicotine patches gradually reduce the drug's levels with much success, an e-cig kit with metered nicotine levels could potentially help many quit. But before a doctor's going to suggest this as an aid -- and honestly? They may never -- we need a proper study to give us some type of health-risk baseline.

As to the pot smokers, the same can largely be said there. While it's generally believed to be safer than smoking cigarettes, you're still burning and inhaling smoke into your lungs with many marijuana "vaporizers." While some use oil extracts, many still require plant matter (read: buds). Vaporizers are touted to release significantly more cannabinoids from marijuana without the need for combustion and without the waste that comes with burning. Combusted smoke contains up to 88% non-cannabinoid material where vaped weed is made up of 95% cannabinoids. 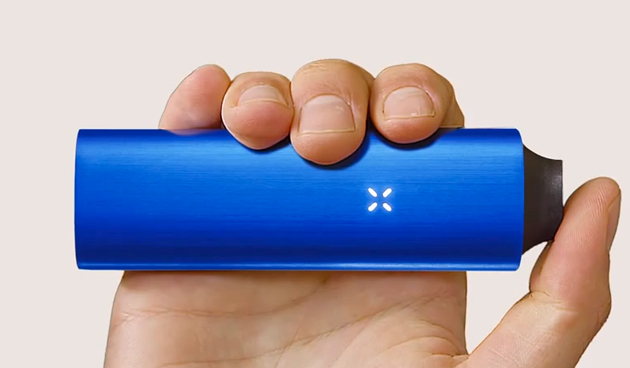 WHAT DOES THE LAW SAY?

The law is still playing catch up because the e-cig world is moving at a ridiculously breakneck pace. Major cities like New York are cracking down, of course, making it illegal to vape in public places. But vaporiums still have free license. And because the practice really leaves no residual smell, we'd not be surprised to find out people were vaping on planes, trains and anywhere you can get a little privacy.

While the industry is still a bit like the wild west, retailers have imposed their own regulations. For example, many outlets will insist on patrons being at least 18 to buy vape products. In Canada, retailers have received cease and desist letters from the government.