Philip Morris International Inc. PM +0.05% and Altria Group Inc. MO +0.92% are joining forces globally to sell electronic cigarettes and other smokeless products, a bid by the tobacco behemoths to compensate for falling sales of combustible cigarettes.

The makers of the best-selling Marlboro cigarette are betting their combined firepower will give them a leg up on rivals in the small but fast-growing market for alternative nicotine products. Altria sells Marlboro exclusively in the U.S.; Philip Morris sells Marlboro everywhere else. 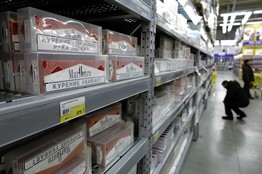 Philip Morris has about a 15% market share of cigarette volumes outside the U.S. Above, cartons of Marlboro cigarettes at a Russian supermarket.Bloomberg News

E-cigarettes are battery-powered devices that turn nicotine-laced liquid into vapor. Philip Morris's alternative technology involves heating instead of burning, like e-cigarettes, but doesn't have batteries and uses tobacco instead of liquid. Both are viewed as less harmful than conventional cigarettes, which release thousands of toxins through combustion.

Philip Morris has about a 15% market share of cigarette volumes outside the U.S., and Altria controls roughly half of the U.S. market. Philip Morris was spun off from Altria in 2008, creating two publicly traded companies.

But excise tax hikes, expanding smoking bans and rising marketing curbs on cigarettes are accelerating volume declines in the U.S. and elsewhere. Cigarette shipments at Philip Morris and Altria sank 5.3% and 3.6% in the first nine months of this year, respectively, from the year-earlier period.

E-cigarettes represent roughly 1% to 2% of the $100 billion U.S. tobacco market and less than 1% of the $800 billion global market but have grown rapidly over the past three years.

Philip Morris plans to begin selling e-cigarettes in the second half of 2014, following in the footsteps of smaller global rivals such as British American Tobacco BATS.LN -0.58%PLC, Japan Tobacco Inc. 2914.TO -3.17% and Imperial Tobacco Group IMT.LN -0.17%PLC. The company could market Altria's e-cigarette under the MarkTen brand or another name, including possibly Marlboro.

Philip Morris has argued its alternative "heat not burn" technology holds even more potential than e-cigarettes because it more closely mimics conventional cigarettes. It plans to start test-selling the alternative product in some international cities during the second half of next year, with the first national launch in 2015.

The U.S. rollout still requires regulatory approval from the Food and Drug Administration. Philip Morris said it has shared its plans with the FDA and wants to introduce it as a "modified risk tobacco product," allowing it to market it as less harmful than combustible cigarettes. Such approval could take at least a year, probably more.

The FDA is also expected to propose federal regulations for e-cigarettes in the coming weeks. Such regulations could slow growth if they introduce curbs such as banning sales to minors, limiting nicotine levels, prohibiting flavors or banning advertising and online sales.

Still, Philip Morris and Altria should be able to accelerate their push into alternative products by combining forces, said Wells Fargo tobacco analyst Bonnie Herzog. ``In our mind, the opportunity is huge,'' she added in a research note Friday.

Philip Morris and Altria had $23.43 billion and $13.04 billion in net revenue excluding excise taxes in the first nine months of 2013, respectively.

This notification is to let our valued customers know that...

Update on "Vaping Illness" from

...support your local vape shop!   On Saturday, I attended an...

The Future of Vaping: 15 E-Cig Experts Share Their Predictions For 2017

3142
Verified Reviews
Customers rate us 4.9/5 based on 3247 reviews.
Higher Crossed Out Priced Items are the Former Selling Price