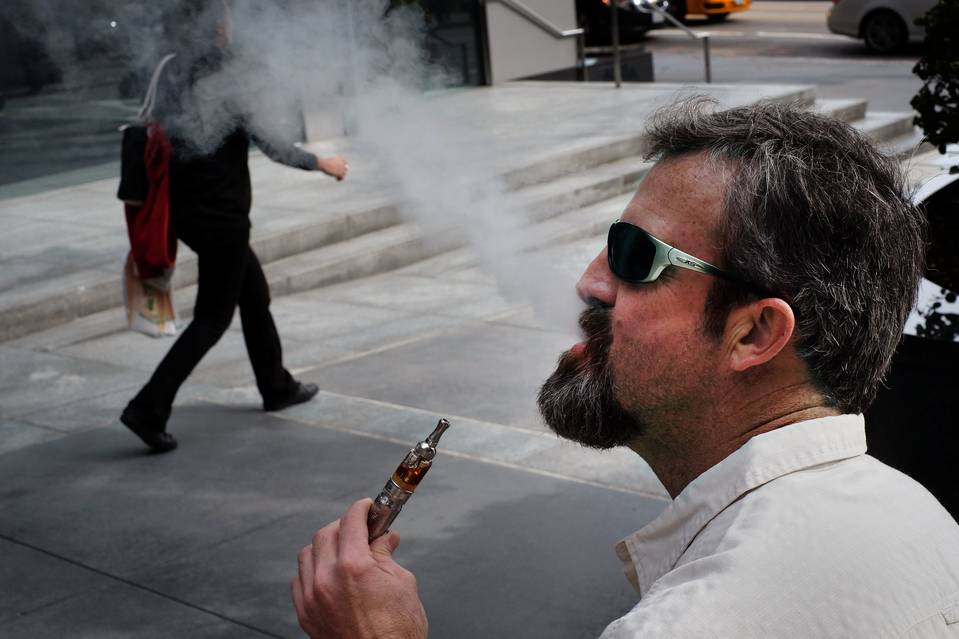 The U.S. government for the first time is taking aim at electronic cigarettes in an advertising campaign, challenging their use as a tool to quit smoking.

Print and radio ads starting Monday target e-cigarette users who continue to smoke traditional cigarettes. They depict an e-cigarette user named Kristy alongside a caption that reads: “I started using e-cigarettes but kept smoking. Right up until my lung collapsed.”

The ads are part of the “Tips From Former Smokers” campaign launched in 2012 by the Centers for Disease Control and Prevention to highlight the dangers of tobacco. Other ads in this year’s $50 million, 20-week campaign, which includes television spots, continue to focus on traditional cigarettes.

The antismoking campaign has been expanded to include e-cigarettes because the majority of users aren’t giving up smoking, said Tim McAfee, senior medical officer at the CDC’s Office on Smoking and Health. “Our core message is cutting down is not sufficient,” he added.

The CDC pointed to a 2014 study in peer-reviewed Nicotine & Tobacco Research estimating that three of four people who use e-cigarettes continue to smoke traditional cigarettes. E-cigarettes are battery-powered devices that heat nicotine-laced liquid into vapor.

E-cigarette backers dismissed efforts to malign “vaping,” saying the ads will discourage people from giving up smoking or encourage them to do their own research into e-cigarettes.

“The anti-side has been spewing crap like this constantly, but we continue to grow,” said Jason Healy, president and founder of Blu, a large e-cigarette brand owned by Lorillard Inc., maker of Newport smokes. “People know the truth about e-cigarettes,” he added.

The ad campaigns are the latest in a series of hurdles for the largely unregulated and fast-growing e-cigarette industry. E-cigarettes, which first hit the market about eight years ago, have swelled into a $2.5 billion industry at retail in the U.S. and are projected to surpass $3.5 billion this year, according to Wells Fargo.

Last April, the Food and Drug Administration issued preliminary rules that would prohibit sales to minors and require e-cigarette makers to submit products for approval. It expects to publish a final rule in June. States have proposed more than 60 bills this year aimed at reining in the industry.

E-cigarettes are widely viewed as far less harmful than traditional cigarettes, which release more than 60 carcinogens through combustion. But many questions remain about the long-term health impact of e-cigarettes, and recent studies found the devices can release the carcinogen formaldehyde.

Their effectiveness as a smoking cessation tool is also debated. A 2013 study in the Lancet, a peer-reviewed medical journal, determined e-cigarettes were “modestly effective at helping smokers quit” in the same way as nicotine patches.

Dr. McAfee at the CDC said that if e-cigarette makers want to promote their products as smoking-cessation tools, they should apply to be classified as nicotine-replacement-therapy devices like patches, gums and lozenges. Such a classification typically requires years of clinical trials.

“There are hundreds of manufacturers and not a single one has chosen to go down this pathway,” said Dr. McAfee.