The new Pod King PLUS is the exact same product as the Pod King MAXX, but in a more ergonomic cylindrical configuration.  Each Pod King PLUS contains 5% nicotine salt and at the very minimum has 900 puffs in it.  A 350mah battery ensures this device can be used for multiple days.  Now Available In:

What's In The Box?

I have ordered a few times now and Big D Vapor is fantastic! Items shipped very quickly and received with a day or two.

Love these disposables! And the shipping is so fast!

T
T.T.G.
Disposables-Tried ‘Em all & this is THE BEST. HANDS DOWN

I originally was introduced to disposables with the puff bar plus... I immediately had to go buy one for myself. I was so impressed. Soon after owning my 1st, to my delight, I discovered that there are MANY other disposables out there to choose from! This was only a few months back- I guess you could say I was living under a rock... I’m not a newbie to the vape game, but disposables were a whole new ballgame for me. So I tried every type I could get my hands on and I am IN LOVE with Pod King Plus. I’ve turned SO many people onto them, they too have tried others- they all NEED to know where I get mine- pod king ‘PLUS’ seem a bit scarce in DALLAS TX for some reason but the shop next to my home has them, and is where I discovered them. So much better than a Puff bar plus. My FAVORITE flavors are definitely Peach ICE, and Honeydew Watermelon ICE- which is nuts bc I don’t like menthol flavors... It’s not a minty or overpowering cool taste- just blends subtly into the rest of the flavor-so don’t let the “ICE” part detour you from trying them out... and I will say THOSE TWO Flavors I MENTIONED- OK YUM they literally almost taste juicy when you take a puff.... and it’s not just my opinion- I have had lots of people who have tried mine say the same thing. Also, I’m not a peach flavor type of person- I’d never think to get it, but PLEASE TRUST ME.... it’s amazing. I haven’t touched 1 single cigarette since I picked up these bad boys. I am OBSESSED. Can you tell?? Lol. Had to share, too many people don’t know about these. I wish they would come out with more flavors!! Hopefully soon- I can’t wait, but until then... peach ice and the occasional honeydew watermelon will keep me more than satisfied! 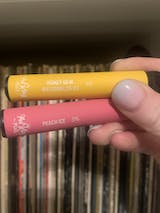 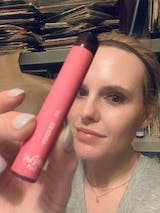 Consistent products at a fair price, never been disappointed. I like the variety of flavors and the content just screams vibrant. I fuck with these guys and you should too.

More from this collection